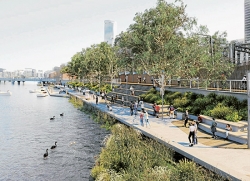 The City of Melbourne is initiating a $300 million "Greenline" project which plans to create a four-kilometre green trail along the Yarra from Birrarung Marr all the way to the Bolte Bridge.

Draft plans have been endorsed to better connect pedestrians and cyclists between a series of “reinvigorated, lively riverfront precincts”; via the riverside pathway and associated bridges and boardwalks. Among the many goals of the project is to improve and nurture ecological and habitat values of the Yarra North Bank. The project also aims to celebrate the river’s historical importance to Aboriginal culture and improve its overall health.

As yet there is no timeline yet for the project, however the draft implementation schedule indicates work would continue until 2028.