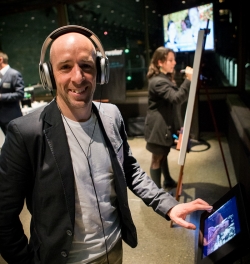 A graffiti canvas, lego figures and a wall of achievements mapped against a meandering river. These were just a few of the fun, interactive displays that greeted guests as they arrived to celebrate a milestone event - ten years of Clearwater.

On Thursday 16 August, a who's who of the water industry gathered at the National Gallery of Victoria to acknowledge the significant achievements of the Clearwater program, and how its people and partners have influenced the water industry in sustainable urban water management.

Host and MC of the evening Tim Fletcher - Professor of Urban Ecology, The University of Melbourne - explained to the 75 guests that in the last decade, Clearwater has trained more than 7,500 people, organised around 250 individual events and become the central point for knowledge sharing and information exchange on water sensitive urban design, and more recently integrated water management.

Short presentations were delivered by Chris Chesterfield, CEO of the Office of Living Victoria and Shaun Cox, Managing Director of Melbourne Water.

With the formalities over, guests were invited to share their own Clearwater moments or listen to video stories from other stormwater champions.

By the end of the evening, the graffiti canvas had been filled with words that represent the very essence of Clearwater's approach to capacity building and the reason why it has achieved so much. Clearwater is inspirational, fun, engaging, adaptable, innovative, responsive, creative...

So what does the next 10 years hold for Clearwater? In addition to partnering with the newly formed Office of Living Victoria, Clearwater will continue to focus on providing the urban water industry with the knowledge, tools and skills needed to enable the transition to water sensitive cities - both here in Victoria and interstate.

Photos from the evening are available in our new image gallery.