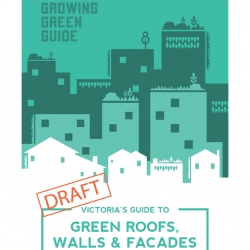 The Growing Green Guide Melbourne have released the draft version of Victoria's Guide to Green Roofs, Walls and Facades. Feedback on the draft Guide is encouraged and open until 18 November.

This Guide has been put together by the Cities of Melbourne, Yarra, Stonnington and Port Phillip, and the University of Melbourne, with funds from the Victorian government.  The authors have been advised by a range of professionals with experience in the green roof, wall and facade industry. The Guide is written primarily for professional projects, but will be relevant for the do-it-yourself audience too. It is intended that this Guide will help propel the development of more green roofs, walls and facades in Victoria, Australia.

The final product will be released early in the new year, and will be a free publication that can be downloaded from http://growinggreenguide.org/

Want to learn more
An information session on the Guide will be held in Melbourne on November 13th, 6pm - 8pm, as part of Canopy: Melbourne's Green Roof Forum.
RSVP for Canopy here