Enviro 2010 - Cities of our Future Workshop 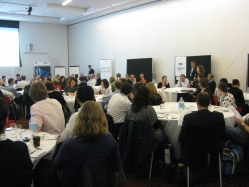 The development of an Australian vision for Water Sensitive Cities took another significant step forward at the Enviro 2010 conference held in Melbourne in July.

Melbourne Water, supported by Clearwater, hosted a 'Cities of the Future' workshop at the conference in order to develop an action plan to implement 10 overarching principles for resilient cities.

The principles first developed at Ozwater 2010 and refined at this workshop, were then presented by Rob Skinner at the International Water Association's World Congress in September.

The Enviro workshop cemented the opportunity for the water sector to play a strong leadership role in the move to reduce the ecological footprint of cities.  It also highlighted several key areas for further action, particularly around the pricing of water to recognise its true value, the development of a new generation of regulatory tools that support integrated and sustainable cities and the need to continue to use demonstrate projects to illustrate the possibilities to the community. The event was attended by over 100 water and environmental leaders from across Australia, and was facilitated by Tim Orton of the Nous Group.

This workshop series is an important component of Melbourne Water's leadership in on the topic of Water Sensitive Cities and its contribution to the global movement to develop sustainable cities.  Feedback from participants indicated that the Cities of the Future workshop series has made a strong contribution to developing a common language and direction for water sensitive cities.

This event was a huge success with well over 90 attendees collaborating to achieve a diverse range of proposed actions.  The culmination of these findings will be presented by Melbourne Water's Rob Skinner in Montreal.  For more information http://liveablecities.com.au/cities-of-the-future-background/