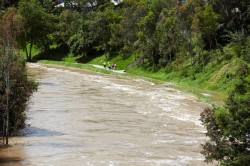 The system takes Bureau of Meteorology rainfall data, overlays that on Melbourne Water’s own data and then outputs estimated flood levels in real time. Based on the flood warning levels that are generated, Melbourne Water is able to inform the Bureau and other authorities in order to issue necessary flood warnings. More information can be found on the Melbourne Water website.