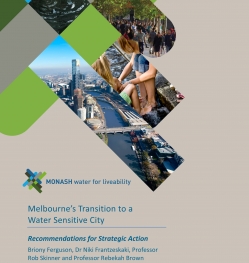 Launched earlier this month, the report  Melbourne's Transition to a Water Sensitive City: Recommendations for Strategic Action  provides an interpretation of the outcomes of the Melbourne’s Transition to a Water Sensitive City project, led by Monash Water for Liveability. The project involved a series of four workshops in the Yarra Valley region of Melbourne and a series of five workshops in the South East region of Melbourne.

The workshop participants were from a range of organisations that have a role in the planning, design, management and use of Melbourne’s water system. This report presents the authors’ interpretation and synthesis of outcomes from the two workshops series and translates them to provide recommendations for coordinated strategic action across key stakeholder groups to enable transformative change in Melbourne’s water system.