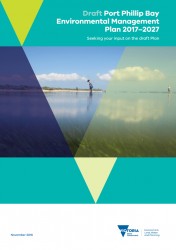 It will be open to both small and large scale projects, with community groups, non-government organisations, local government and other agencies encouraged to apply (round 1 of the fund closes on 15 February 2017).

Developed by the Department of Environment, Land, Water and Planning in partnership with Melbourne Water and the Environment Protection Authority Victoria, the draft Plan is part of the Victorian Government’s commitment to ensure Port Phillip Bay remains healthy and resilient over the coming decade.

The draft Plan proposes three goals to guide action and investment over the next ten years:

Consultation on the draft Plan is open until 10 February 2017.