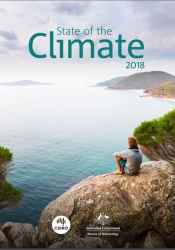 The State of the Climate report draws on the latest monitoring, science and projection information to describe variability and changes in Australia’s climate. Observations and climate modelling paint a consistent picture of ongoing, long term climate change interacting with underlying natural variability.

These changes affect many Australians, particularly the changes associated with increases in the frequency or intensity of heat events, fire weather and drought. Australia will need to plan for and adapt to some level of climate change.

This report is a synthesis of the science informing our understanding of climate in Australia and includes new information about Australia’s climate of the past, present and future. The science underpinning this report will help inform a range of economic, environmental and social decision-making and local vulnerability assessments, by government, industry and communities.

To read the full report visit the BOM website.