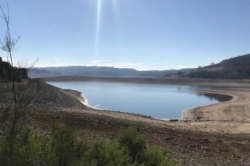 The Victorian Government and Melbourne Water have delivered a clear position in response to the Federal Government's pressure on the states to build more dams.

He discussed that dams divert water from rivers thus taking water from the environment and farming. The impacts of climate change mean our dams now have 30% less water coming into them.

Thwaites said we need to look towards alternative water supplies such as recycled water, harvested stormwater and ground water. He also mentioned the Wonthaggi desalination plant is supplying 30% of Melbourne's main water supply.

The full interview can be heard on Radio National Audio.